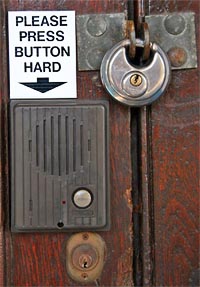 So the gf and I decided to grab some food before we hit the ice bar. We sat down at the Little Mermaid, a restaurant in the V&A waterfront, and perused the menu hoping to find something that looked appetising at a reasonable price. We both eventually settled on getting their lunch steak… a decent looking meal for fifty something rand. The only problem was that it was past 6 and their “lunch” cut-off time. Never fear I thought, I’ll just ask nicely. Surely they would be ok with that?

Nope. Even though we said we would leave if they refused to sell us the meal, they still declined. It’s a well known fact that restaurants with two menus usually do so in order to get more money out of their dinner time guests. Before we left I decided to go and speak to the manager to get their side of the story. Their story was this: They had a system in the kitchen and that system dictated that at 6pm they packed away the lunch time steaks and unpacked the R40 more expensive steaks for dinner.

I stood there dumbfounded, 100% in something akin to a moral dilemma… As a systems person I can understand their argument, whether you believe them or not, that systems make sure that the world works and in the absence of systems you end up with chaos. But, on the other hand, I wanted my fscking lunch steak and I wasn’t prepared to pay extra just because I got their a few minutes late.

I walked away temporarily pacified, but the more I thought about it the more I realised how wrong they were. Their system was limiting their ability to serve the customer properly. I wouldn’t have been told it was “impossible” at the Cape Grace, the 5 star hotel nearby, a point I made but was lost on the two managers.

Really what this highlighted was how the systems we interact with (or design) can be fundamentally flawed by our own need to “stick to the rules”. I’m obviously not calling for all out anarchy, but I do believe you need to ask yourself one fundamental question when implementing a rule in the systems you design:

Is this rule limiting the freedom of the user and their interaction with the system to an extent greater than that which is required to keep the system running?

In other words: Could the restaurant have sold me a fscking steak without going bankrupt? The obvious answer here is yes, and it becomes more obviously “yes” when you consider that any user (customer) who feels like the system did something special for them is going to feel a certain affinity for that system (restaurant) and probably return multiple times.

The more you become aware of this the more you start to see it in real life. I had my wallet stolen and upon getting my new cards, signed up for internet banking only to discover that by default my monthly transfer limit was set to R0; something that requires you to go into the bank with your ID to change… This wouldn’t have been such a major issue if I hadn’t JUST LEFT THE BANK where the teller told me that all I needed to sign up to internet banking was my card number and PIN. In addition to that, my beneficiaries were all deleted… Why did my internet banking profile had to even get removed? Couldn’t they just have unlinked it from one card number and added it to the new one? Did they even think of the customer when designing these systems?

Then vodacom… I want an Nokia E61. I’m due for an upgrade in 7 months, BUT I’m willing to PAY THEM MONEY in order to get the upgrade now. Apparently this is impossible?

Can you think of other systems where a rule has been put in place that makes no sense and impacts the user negatively? Perhaps more important, can you think of systems where the designers have had the foresight to make the system flexible enough to accomodate the more unusual requests?