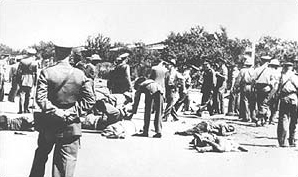 Because it seems that far too few people know this, Human Rights Day (21 March) is a commemoration of the Sharpeville Massacre where 69 innocent people were killed and over 300 more were injured during a mostly peaceful protest against the Pass Laws.

The Sharpeville Massacre marks a watershed moment in South African history. The event was one of the first times that the international community stood up and took notice of the truly brutal and oppressive regime in power. The event made it to the international press and four days later the government banned all black political organisations. Many leaders were arrested and many others were forced into exile… and this, unfortunately, happened in 1960.

To put that in perspective; South Africa only got its freedom in 1994… If we assume that the recent events that took place in Zimbabwe were Zimbabwe’s Sharpeville (which I doubt), Zimbabwe would be due for freedom in 2041.

I sincerely hope that progress can move a little quicker with pressure from countries like South Africa… 13 years is a very short time to forget what oppression feels like and the passion with which it was fought, Mr Mbeki.